NOW READING:
On Friday, February 3rd, we will begin discussing Rules of Civility, by Amor Towles

OUR NEXT BOOK(s):
Sea of Glory, by Nathaniel Philbrick 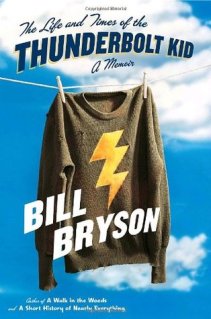 Several years ago, my best friend, who grew up in Des Moines in the 1950’s, gave me a copy of Bill Bryson’s The Life and Times of the Thunderbolt Kid. I enjoyed it so much that I subsequently read and enjoyed virtually all of his numerous books. So, when the opportunity recently arose to suggest it to Books, Brews, and Banter, I heartily recommended it, although I rarely read books twice.
“I can’t imagine there has ever been a more gratifying time or place to be alive than in Iowa and the 50s,\” Bryson wrote in the first chapter, and then set out to corroborate it.  He and his friends found endless adventures on the streets of Des Moines at a time when all kids hung outside pretty much all day during the summers, only returning home for dinner.
In this hilarious memoir, Bryson captures the time and place of his boyhood in Des Moines in the 50s and 60s, reminding us of a happy time when cars, household appliances, and even nuclear weapons grew larger and more abundant each year, while DDT, cigarettes, and atomic fallout were considered harmless or even good for you. He writes about his loving but eccentric family, including warm portraits of his father, a gifted but often absent sportswriter for the Des Moines Register, and his absentminded mother, who was the home furnishing editor also for the Register.
His early childhood recollections include the first televisions, comic books, toys (electric football and erector sets), his mother’s bland cooking, the threat of the Atomic Bomb, movie matinees, fears of polio, TV dinners, the Iowa State Fair, and visits to Grandpa’s farm. His alter ego, The Thunderbolt Kid, born of his love for comic book super heroes and his need to vaporize awful evildoers, allowed him to see under women’s clothing, if only in his imagination. When adolescence took over, Bryson’s adventures were replaced with riskier hobbies of smoking, drinking, forging IDs, and his growing fascination with sex that included the discovery of Dad’s secret stash of girlie magazines, his attempts at gaining access to the notorious “strippers tent” at the State Fair, and his unfilled desire to see Mary O’Leary naked.
Bryson is a master of the detail.  He mined magazines and newspapers of the period with an eye for the tragic, the revealing and the just plain odd, including the story of the barmaid charged with obscenity for being able to carry two glasses of beer on her breasts, the black man sentenced to death for stealing $1.95, and parents climbing ladders outside polio wards to shout greeting to the children.
His book is so outlandish and improbably entertaining, you sometimes begin to doubt its veracity. For example, none of our book club members remember his contention that the Japanese sent balloons with bombs in them over the US during WWII, some going as far as Virginia.
Nonetheless, it’s a wondrous laugh-out-loud book, evoking both the unadulterated joys and everyday battles of childhood.  A great fun-read, especially for Baby Boomers nostalgic for the good old days. Ken Johnson