NOW READING:
On Friday, May 20, we will continue discussing The Brilliant Life of Eudora Honeysett by Annie Lyons.

OUR NEXT BOOK:
Our next book will be Saving Us by Katharine Hayhoe, beginning date TBD. 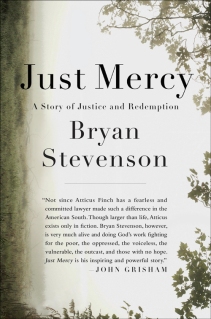 As I write, Arkansas is trying to execute eight men on a calendar of two a day, every other day, for over a week, beginning next Monday, April 17. The state “needs” to kill the men before the medications used in the lethal injections expire. Most of these men have been on death row for over twenty years, and now they are rushed to death because of an expiration date on a drug.

I can hardly bear to think, talk, or read about capital punishment because it feels so fundamentally wrong. So I’m amazed at how Bryan Stevenson could turn a book about death row into truly A Story of Justice and Redemption.

Stevenson is a wonderful storyteller, spotlighting individuals whom he has helped, or tried to help, since he founded the Equal Justice Initiative to defend those often wrongly condemned and trapped in the criminal justice system.

He explains where we go wrong when we (with good intentions) personalize victims such as seven year-old Megan Kanka, for whom Megan’s Law is named. He explains the profit motive in incarceration.

But mainly he shows us people like ourselves, but without affluent white privilege: Walter McMillan, a black man sentenced to die for a murder he patently did not commit; Herbert Richardson, a traumatized young veteran who only meant to scare a pretty young nurse into his arms with a homemade bomb, but killed a child instead; Marsha Colbey, a mother who suffered the sadness of a stillborn child, but was demonized as a murderous parent because she was very poor; and more.

What most impresses me (and puzzled me a little at first) is Stevenson’s calm, steady perseverance: every day he walks into prisons and courthouses where the people in power are not glad to see him. They are not willing to listen, or reconsider, or admit a centimeter of error even in the face of plain and undeniable facts.

How does he keep doing such work day after day, year after year, understaffed and beleaguered by people desperate for his help?

I think his superpower comes from an amazing lack of ego. He never lets the challenges become about him. He kept his focus on others, on their needs. He admits his own brokenness – indeed, he recognizes it as a gateway to grace. And that grace, mingled with intelligence and training, keep him going. It sounds so simple, but seems so hard. I’m inspired and instructed and humbled. Just Mercy was a perfect choice for a Lenten read.