NOW READING:
On Friday, October 7th, we will continue discussing The Map That Changed the World by Simon Winchester.

OUR NEXT BOOK:
We have tentatively chosen our next book: The Burgess Boys, by Elizabeth Strout. Start date TBD. 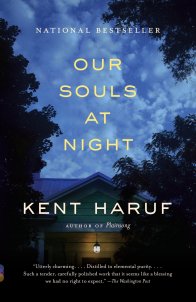 Kent Haruf was a gentle, tranquil writer, and his voice is solid in this bittersweet story of last love.

Addie and Louis have lived near one another in Holt, Colorado—on the eastern plains—for years. They have never been close friends, but they have followed each other’s lives peripherally. Both widowed, they’ve lived parallel, but not intersected lives.

Now, Addie, 70, is tired of being alone, especially at night, and she approaches Louis with an offer: that they spend the nights together. This isn’t about sex or romance; it’s about companionship, about being with another person in the night and waking up together. At first, Louis is wary, but then he realizes he, too, needs more human contact.

They talk into the night, wiping away their loneliness, and shrug off any opposition. And from this, a sweet end-of-life love develops.

As the bond between the two grows, Addie’s son and Louis’s daughter are unsure what to make of the relationship and the rest of the town reacts with various levels of acceptance.

Adding to the sweet sorrow of the book is the fact that Haruf wrote it while he knew he was dying—the book was published after his death from lung cancer at 71, around the age of his characters. He knew how it felt to face death close up.

The book is also a Netflix movie starring Jane Fonda and Robert Redford, filmed last year in Colorado Springs and Florence, Colorado, where Haruf spent his final years. He was born in my hometown of Pueblo, Colorado and was my age, so we probably met in the maternity ward.